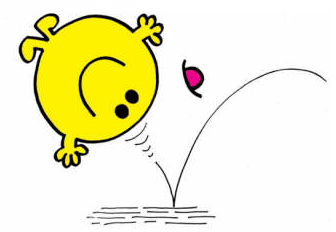 Another in our continuing exploration of everyday sounds (Screams, Applause, Pouring water) is the bouncing ball. It’s a nice one for a blog entry since there are only a small number of papers focused on bouncing, which means we can give a good overview of the field. It’s also one of those sounds that we can identify very clearly; we all know it when we hear it. It has two components that can be treated separately; the sound of a single bounce and the timing between bounces.

Let’s consider the second aspect. If we drop a ball from a certain height and ignore any drag, the time it takes to hit the ground is completely determined by gravity. When it hits the ground, some energy is absorbed on impact. And so it may be traveling downwards with a velocity v1 just before impact, and after impact travels upwards with velocity v2. The ratio v2/v1 is called the coefficient of restitution (COR). A high COR means that the ball travels back up almost to its original height, and a low COR means that most energy is absorbed and it only travels up a short distance.

Knowing COR, one can use simple equations of motion to determine the time between each bounce. And since the sum of the times between bounces is a convergent series, one can find the maximum time until it stops bouncing. Conversely, measuring the coefficient of friction from times between bounces is literally a tabletop physics experiment (Aguiar 2003, Farkas 2006, Schwarz 2013). And kinetic energy depends on the square of the velocity, so we know how much energy is lost with each bounce, which also gives an idea of how the sound levels of successive bounces should decrease.

[The derivation of all this has been left to the reader 😊. But again, its straightforward application of the equations of motion that give time dependence of position and velocity under constant acceleration]

Its not that hard to extend this approach, for instance by including air drag or sloped surfaces. But if you put the ball on a vibrating platform, all sorts of wonderful nonlinear behaviour can be observed; chaos, locking and chattering (Luck 1993).

For instance, have a look at the following video; which shows some interesting behaviour where bouncing balls all seem to organise onto one side of a partition.

So much for the timing of bounces, but what about the sound of a single bounce? Well, Nagurka (2004) modelled the bounce as a mass-spring-damper system, giving the time of contact for each bounce. It provides a little more realism by capturing some aspects of the bounce sound, Stoelinga (2007) did a detailed analysis of bouncing and rolling sounds. It has a wealth of useful information, and deep insights into both the physics and perception of bouncing, but stops short of describing how to synthesize a bounce.

To really capture the sound of a bounce, something like modal synthesis should be used. That is, one should identify the modes that are excited for impact of a given ball on a given surface, and their decay rates. Farnell measured these modes for some materials, and used those values to synthesize bounces in Designing Sound . But perhaps the most detailed analysis and generation of such sounds, at least as far as I’m aware, is in the work of Davide Rocchesso and his colleagues, leaders in the field of sound synthesis and sound design. They have produced a wealth of useful work in the area, but an excellent starting point is The Sounding Object.

Are you aware of any other interesting research about the sound of bouncing? Let us know.

Next week, I’ll continue talking about bouncing sounds with discussion of ‘the audiovisual bounce-inducing effect.’