We recently had a blog entry about the Future of Headphones. Today, we’ll look at another ubiquitous piece of audio equipment, the microphone, and what technological revolutions are on the horizon.

Its not a new technology, but the Eigenmike is deserving of attention. First released around 2010 by mh acoustics (their website and other searches don’t reveal much historical information), the Eigenmike is a microphone array composed of 32 high quality microphones positioned on the surface of a rigid sphere. Outputs of the individual microphones are combined to capture the soundfield. By beamforming, the soundfield can be steered and aimed in a desired direction. 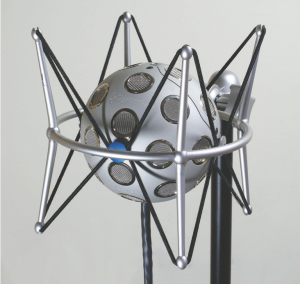 This and related technologies (Core Sound’s TetraMic, Soundfield’s MKV, Sennheiser’s Ambeo …) are revolutionising high-end soundfield recording. Enda Bates has a nice blog entry about them, and they were formally evaluated in two AES papers, Comparing Ambisonic Microphones Part 1 and Part 2.

Soundskrit is TandemLaunch’s youngest incubated venture, based on research by Ron Miles and colleagues from the University of Binghampton. Tandem Launch, by the way, create companies often arising from academic research, and previously invested in research arising from the audio engineering research team behind this blog.

Jian Zhou and Ron Miles were inspired by the manner in which insects ‘hear’ with their hairs. They devised a method to record audio by sensing changes in airflow velocity rather than pressure. Spider silk is thin enough that it moves with the air when hit by sound waves, even for infrasound frequencies. To translate this movement into an electronic signal, they coated the spider silk with gold and put it in a magnetic field. Almost any fiber that is thin enough could be used in the same way, and different approaches could be applied for transduction. This new approach is intrinsically directional and may have a frequency response far superior to competing directional solutions.

MEMS (MicroElectrical-Mechanical System) microphones usually involve a pressure-sensitive diaphragm etched directly into a silicon wafer. The Soundskrit team is currently focused on developing a MEMs compatible design so that it could be used in a wide variety of devices and applications where directional recording is needed.

Another start-up aiming to revolutionise MEMS technology is Vesper .  Vesper MEMS was developed by founders Bobby Littrell and Karl Grosh at the University of Michigan. It uses piezoelectric materials which produce a voltage when subjected to pressure. This approach can achieve a superior signal-to-noise ratio over the capacitive MEMS microphones that currently dominate the market.

A few years ago, graphene-based microphones were receiving a lot of attention, In 2014, Dejan Todorovic and colleagues investigated the feasibility of graphene as a microphone membrane, and simulations suggested that it could have high sensitivity (the voltage generated in response to a pressure input) over a wide frequency range, far better than conventional microphones. Later that year, Peter Gaskell and others from McGill University performed physical and acoustical measurements of graphene oxide which confirmed Todorovic’s simulation results. But they seemed unaware of Todorovic’s work, despite both groups publishing at AES Conventions.

Gaskell and colleagues went on to commercialise graphene-based loudspeakers, as we discussed previously. But the Todorovic team continued research on graphene  microphones, apparently to great success.

But I haven’t yet found out about any further developments from this group. However, researchers from Kyungpook National University in Korea just recently reported a high sensitivity hearing aid microphone that uses a graphene-based diaphragm.

For a bit of fun, check out Catchbox, which bills itself as the ‘the World’s First Soft Throwable Microphone.’ Its not exactly a technological revolution, though their patent pending Automute relates a bit to the field of Automatic Mixing. But I can think of a few meetings that would have been livened up by having this around.

As previously when I’ve discussed commercial technologies, a disclaimer is needed. This blog is not meant as an endorsement of any of the mentioned companies. I haven’t tried their products. They are a sample of what is going on at the frontiers of microphone technology, but by no means cover the full range of exciting developments. In fact, since many of the technological advances are concerned with microphone array processing (source separation, localisation, beam forming and so on) as in some of our own contributions, this blog entry is really only giving you a taste of one exciting direction of research. But these technologies will surely change the way we capture sound in the near future.

Some of our own contributions to microphone technology, mainly on the signal processing and evaluation side of things, are listed below;